A few common (and not so common!) questions that have been asked about scooter and motorbike battery care and maintenance.
Not sorted into any particular order, but covering many areas of battery care in including parts number questions, topping up questions, fault finding questions, battery charging questions and much more!

Click on a question below to view the answer…

~How do I charge my motorcycle battery?

~Do I have to charge a motorcycle battery?

~Can I put my battery straight on the bike to charge it?

~Can I use a car charger or a high rate charger?

~Why do I need to top up my lead acid battery?

~I need to top up my old battery, what should I use?

~What battery does my bike use?

~What is the popping or fizzing noise I can hear when I charge my battery?

~How can I check if a motorcycle battery is fully charged?

~I’ve put a new battery on my bike but every time I go to use it the batteries flat?

~My motorcycle battery has gone flat, can I recharge it?

~How long does a motorcycle battery last for and why don’t they come with long warranties like car batteries?

~When I put the battery on the bike, which terminal do I connect first?

~What will happen if I connect the battery terminals the wrong way round?

~What is the white stuff that collects in old batteries?

~How do I keep my motorcycle battery from sulphating?

~Is it true that you shouldn’t leave a motorcycle battery on a concrete floor because it loses it’s charge quicker?

~Why are some batteries bigger than others?
~I have just connected the battery terminals the wrong way round?

~How tight should the battery terminal bolts be?

~What is battery acid & is it corrosive?

~I have accidentally drunk some battery acid I left in a lemonade bottle?

are dry charged to about 80%. If you don’t give the battery a top up charge (3-4 hours) the battery will only ever be 80% efficient (which will greatly shorten the life span of the battery)

Can I put my battery straight on the bike to charge it?
Unfortunately, this method of charging a battery will also mean the battery is only ever 80% efficient & may damage a new battery.

cannot take the same high charges or abuse that car batteries can.

Why do I need to top up my lead acid battery?
Lead acid type batteries use electrolyte (battery acid) which is a mixture of water & sulphuric acid. When the water evaporates this makes the acid concentration stronger. If the acid becomes too strong it will corrode the batteries internal components which will cause loose particles to collect in the bottom of the battery & short it out

I need to top up my old battery, what should I use?
Top up old batteries with distilled water

. The electrolyte (or battery acid) is a mixture of water & sulphuric acid. When the battery reacts to produce electricity, only the water part of the mixture is used up so adding distilled water

dilutes the electrolyte mix back to its correct strength.

What is the popping or fizzing noise I can hear when I charge my battery?
As your battery charges, the electrolyte (battery acid) reacts with the lead plates inside the battery to produce lead sulphate & in the process the electrolyte releases some of it’s hydrogen, which causes bubbles to be produced inside the battery which can produce a popping or fizzing noise (similar to the bubbles in a lemonade bottle!). This noise can also be produced for a short period after the motorcycle has been ridden as the chemical reaction which produces electricity is still occurring. BUT, the noise should be fairly quite, so if your 50 meters away from your bike & it sounds like someone has put a firecracker under your seat, our advice would be ‘RUN LIKE F**K!!!’.

My battery says CTX9-BS on it, is this the same as a YTX9-BS?
In most cases, yes, the batteries are the same. The first letter is a manufactures mark & different makes of batteries use a different letter. For example a Sprint battery would be YTX9-BS

, an Exide battery would be CTX9-BS

& a Delco battery would be GTX9-BS

. This applies to most models of lead acid, sealed & gel filled motorcycle batteries

.
A couple of exceptions to the rule are Westco & Yuasa batteries, who seem to make up their own battery listings, more to make life difficult & to p*ss people off then for any practical purpose! If in doubt, we can usually confirm a battery if you send us the dimensions or the make, model & year of motorbike a battery is from.


How can I check if a motorcycle battery is fully charged?
The best way to check a battery is with a volt meter

I’ve put a new battery on my bike but every time I go to use it the batteries flat?
There are a few reasons why this type of fault can occur. A few of the most common are:

are being constantly recharged while the engine is running, they are only receiving a ‘top up charge’. motorcycle batteries

are not rechargeable like mobile phone batteries, which run almost completely flat then can be recharged. Once a motorcycle battery drops below the level required to start a motorbike (usually around 12.4 volts), it means that the battery is starting to fail.

are at their best for about 3 years. Because of their size, motorbike batteries don’t last anyway near as long as car batteries so warranties tend to be alot shorter.

When I put the battery on the bike, which terminal do I connect first?
Always connect the positive (+) or red terminal first. Make sure there are no flammable substances (i.e. leaking petrol!) around the bike as connecting the battery can produce sparks which can ignite flammable materials.

What will happen if I connect the battery terminals the wrong way round?
Your local dealer will be laughing all the way to the bank with the money they made from all the spare parts you had to buy! You might be lucky & just blow a fuse. We, however, work on the sods law theory (if it can go wrong, it will go wrong!) which usually means replacing lots of expensive electrical parts like the CDI.

What is the white stuff that collects in old batteries?
The white stuff is lead sulphate which is the same compound the lead plates in the battery turn into when they discharge. Lead sulphate is a crystal & can destroy a battery if allowed to build up. This process is called sulphation.

What causes sulphation?
In normal battery operation, lead sulphate never has much chance to build up on the plates because the charge cycle returns the sulphur back into the electrolyte & turns the plates back into lead. But a battery that discharges too deeply can develop sulphation.
Another cause of sulphation is low fluid or electrolyte level in the battery. When the fluid level drops, the lead plates are exposed to air. Under these conditions, the lead plates will oxidize & sulphate & the battery will no longer hold a charge.

How do I keep my motorcycle battery from sulphating?

Is it true that you shouldn’t leave a motorcycle battery on a concrete floor because it loses it’s charge quicker?
You’ll really believe anything you read, won’t you? I suppose you still believe in Farther Christmas & the Tooth Fairy as well!? It doesn’t matter what kind of surface you store a battery on, concrete, metal or wood as long as the battery is kept level, not stored in excessively high temperatures & charged regularly.

If I disconnect the battery terminals, will the battery still go flat?
A battery will still carry on discharging, even if it’s not connected to a motorcycle although it will lose it’s charge at a much slower rate.

I have just connected the battery terminals the wrong way round?
1) Call White Dog Motorcycle Accessories & get ready to part with vast amounts of money!
2) Lie down & cry for a bit when you realise how much it will cost
3) Don’t bother applying to MENSA

What is battery acid & is it corrosive?
Battery acid (or electrolyte) is a mixture of sulphuric acid & distilled water & is highly corrosive, please handle with extreme care. Try to avoid contact with skin & eyes & don’t put left over acid in empty lemonade bottles!

I have accidentally drunk some battery acid I left in a lemonade bottle?
1) PANIC
2) Don’t stray too far from a toilet
3) Make sure your life insurance is paid up
4) Don’t bother applying to MENSA 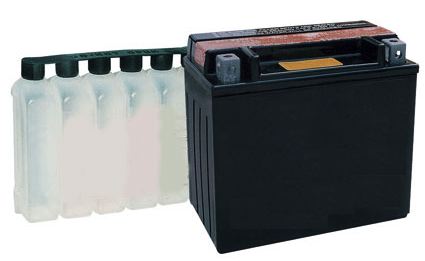 Disclaimers:
The information provided on this page is ‘to the best of our knowledge’ and should not be taken as 100% accurate!!

To keep this page as a free resource for people to use, there are affiliate links (mainly Amazon) throughout the article. These affiliate links help maintain the cost of running this blog (basically, if you visit Amazon through one of the links and buy something, we make a few pence!).

All you ever wanted to know about bike batteries but were afraid to ask :-)